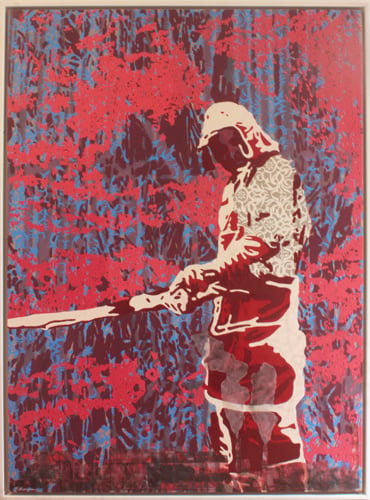 The Cane Cutter" (oil and silk on linen) is based on modern imagery of the sugar cane field worker overlain with stitched silk photographic imagery of the Pu‘u Nene sugar mill that brought the artist's Filipino grandparents to Hawai‘i as field laborers. They were among the thousands of immigrants from Asia and Europe working an industry that rapidly changed the Hawaiian Islands in the 19th and 20th century. The abstract background pattern is known as "massquite," a mixture of sugar and molasses which is rapidly spun in a centrifuge to separate the sugarcane molasses. The intricate damask pattern references the ornate barong tagalog, or traditional Filipino men's dress shirt, implying that the beauty and finery inherent in the culture could never be diminished by the difficulty of their labors. The painting is a testament to industry’s role in transforming Hawai‘i’s environment and social fabric.